Highlights of the Hungarian GP

Another time, the hungarian GP let us an spectacular and crazy race, just see the top 10:

Another bad start for the Mercs, finished in drama

For the second race in a row both Mercs were mug at the start of the race, this time with both Ferrari.
Then they were "killing each other" where Hamilton finished going to the gravel
Hamilton trying to get postions back, he crashed into one of the Red Bulls (Ricciardo) breaking his front wing, making a pit stop and making a drive through penaltie for the crah with Ric.

More drama for Rosberg, not pace with prime, mistake a the final stop putting prime again when he should had gone to option. After being the Championship leader he finished losing more points. The Drama arrived at the finals part of the race where a fast Ricciardo made a really dive on to Rosberg going wide at the first corner, coming back and making a punche to Rosberg.
Finally both Mercs out of the top 5 (Ham 6 and Ros 8) A race as the old Sebastian Vettel, bad luck for Kimi

After overtaking the Mercs at the start, Seb control the all race as his old times. Perfect race of Seb with an awesome pace. At the begining it could being a 1-2 for Ferrari since Germany 2010 but Kimi had a MGU-H problem and retired. 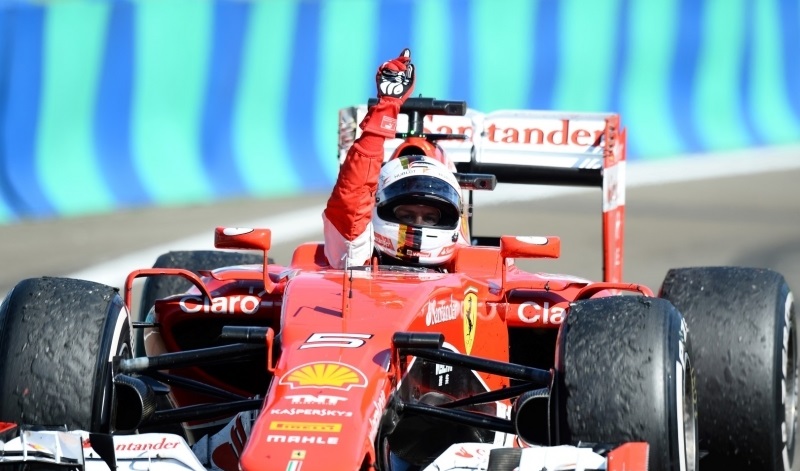 Another DNF for Carlos

For two races in a row, Carlos Sainz Jr retired while he was at the points. And his team made a slow pit stop so Verstappen could overtake him...

Both Red Bulls at the podium

After a hard season with a lot of problems just cos the engine of Renault, yesterday both RB cars were at the podium with Kvyat 2 and Ricciardo 3rd. Ricciardo could had won the race but he made the horrible mistake of the impossible overtake to Rosberg, that cost him the win.
Daniil got his first podium of his career in F1 After all the Rookie mistakes, Max Verstappen was so close to get podium hi was 4th

In all the caos, both Mclaren Honda finished

Per once, Mclaren Honda (specialy Alonso) had luck. Alo P5 and Jenson P9, the car had a decent pace.
After the difficult qualifying, Alonso made a great race with a good pace and the right decision during the SC going to the box and putting the option tyre and going faster and he was the 3rd during the lasts laps (of fastest laps) It was a crazy race, with a lots of fights and actions, thanks F1

Goes for you Jules


This was the first race after Jules passed away after 9 month of fight vs coma. We lost a great driver, a future world champion and a great person...